There are various types of video cameras that hunters use to record footage of their hunt (memories) and to keep an eye on animal behavior.

In this article, we’ll discuss what video cameras hunters use, what is the best camera, and how to use it to film hunting.

What video cameras do hunters use?

Most hunters use trail cameras or game cameras to record videos of their hunting adventures. These cameras are designed to be mounted on trees or other structures and get started by motion. This motion sensor helps the camera to record videos or take photos of animals without wasting their storage capacity.

Some popular brands for trail cameras are Browing, Moultrie, and Stealth Cam. Their cameras are generally small and lightweight, with a weather-resistant design to survive in bad conditions.

Trail cameras have many features like high-resolution sensors infrared night vision and the ability to transfer footage wirelessly to a smartphone or other device.

In addition to trail cameras, some hunters also use traditional video cameras or action cameras to record videos while hunting. They mount these cameras on a tripod or carried on the body to capture video from different angles. Read 10 Best cameras for filming hunts (2023 Guide) for more information.

Caution: The use of cameras and other equipment while hunting can be regulated by local laws and regulations. So, hunters should check the rules before using any type of camera while hunting.

Why do hunters use video cameras while hunting?

There are a number of reasons why hunters use video cameras while hunting.

How to use hunting video cameras?

Here are some steps on how to use a hunting video camera:

By following these steps, you should be able to effectively use a hunting video camera to take photos or videos of wildlife in your area.

Where to place hunting video cameras while hunting? 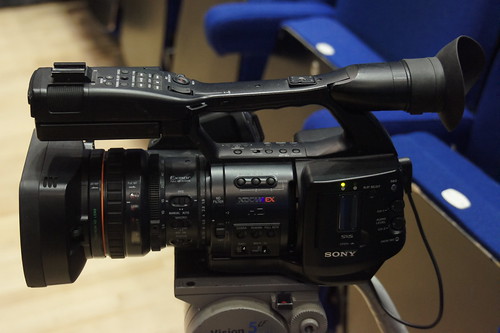 When placing hunting video cameras while hunting, it is important to choose a location that is likely to attract the type of animal you are trying to capture.

Some factors to consider when selecting a location for your hunting video camera include the following:

When placing your hunting video camera, it is also important to consider the camera’s angle and height.

Positioning the camera at a height of around 3-4 feet above the ground is often a good choice for capturing images or videos of deer. For larger animals, such as elk or moose position the camera at a higher height.

Finally, it is important to consider the camera’s line of sight when placing it. Make sure that the camera has a clear view of the area you want to capture and avoid placing it in areas where it gets blocked by trees or other objects.

Types of video cameras for hunting

There are different types of video cameras for hunting, including the following:

Cameras that are activated to take video or photographs by motion or heat and are installed on trees or other buildings. These cameras are triggered in a variety of ways. They are often used for the purpose of tracking the behavior of the hunt and kept in the field for long stretches of time without being disturbed.

This camera is both compact and portable, making it possible to bring it along with you on a hunt. In general, they are very portable, simple to use, and have the capacity to record either still images or moving videos.

Cameras that have been developed specifically for usage in harsh, outside conditions. These cameras are often used for activities such as hunting. They are normally compact and lightweight, and they are attached to various positions, such as chest harnesses, helmets, or other places, in order to record video without the need for the user’s hands.

The classic form of the video camera. Camcorders are often bigger and heavier than other types of cameras, but they provide access to more sophisticated functions and produce a video of better quality. Record footage of a hunt with these, or you can just use them to memorialize the event.

When selecting a video camera for hunting, it is important to think about a number of variables, including the kind of hunting you will be performing, the circumstances you will be in, your spending limit, and the features you need.

Features to consider when choosing a video camera for hunting

The following is a list of features that should be considered while selecting a video camera for hunting:

In conclusion, hunters make use of a wide array of video cameras to record footage of their hunts, chronicle their experiences, and keep an eye on the behavior of animals.

Camcorders, portable cameras, action cameras, and trail cameras are just some of the several kinds of video cameras that are often utilized by hunters.

When selecting a video camera for hunting, it is important to think about a number of variables, including the kind of hunting you will be performing, the circumstances you will be in, your spending limit, and the features you need.